Leaflet on Borehole Geophysics with Case Studies
Click here to download the PDF.
(Note to Save, Right-click and select 'Save Target As')

Borehole geophysics takes advantage of using regular geophysical techniques at depth down a borehole. The techniques operate in the same manner as they would on the surface, with the advantage of providing high resolution data at depth. Borehole seismic surveys are used to obtain in situ properties of soil and rock strata and are often used as part of a comprehensive geotechnical investigation . 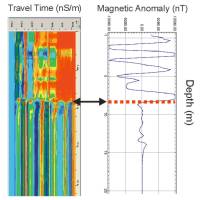 In this example downhole GPR and magnetic techniques were used to investigate the depth of the pile to a high degree of accuracy.