Leaflet on EM with Case Studies
Click here to download the PDF.
(Note to Save, Right-click and select 'Save Target As')

In electromagnetic (EM) mapping, the electrical conductivity of the ground is measured as a function of depth and/or horizontal distance. Mapping variations in conductivity can indicate anomalous areas worthy of further geophysical or intrusive investigation. The technique is cost effective and, ideally, should be used for site-investigation mapping, borehole and trial-pit programme design, and for filling gaps between boreholes.

EM conductivity measurements are taken by inducing an electromagnetic current into the ground from a transmitter coil above surface, and recording the resulting secondary electromagnetic field at a receiver coil a fixed distance away. The strength of the secondary field depends upon the conductivity of materials in the ground. The transmitter and receiver coils are usually mounted on a single device, which is carried along parallel survey lines across the survey area.

Different rocks and buried structures/objects exhibit different values of conductivity. Large increases in conductivity may be caused by increases in ion concentration (total dissolved solids) in the groundwater. The measurements of differences are useful in environmental applications such as mapping shallow contamination plumes and detecting the extent of landfills. In geotechnical applications, such measurements can be used to map sinkhole locations and soil thicknesses.

In addition to the noting of conductivity readings, measurements of the in-phase component of the electromagnetic field are recorded. The in-phase measurement reflects the presence of metallic conductors and is used for metal detection. Abrupt spikes are indicative of metallic conductors such as buried cables, pipes, piles, drums, unexploded ordnance (UXOs) and tanks. 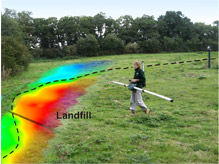 In this example (left), the extent of unknown buried landfill waste is clearly shown in red.

The lower left figure shows an EM survey being undertaken at a petrol station.

The RSK geophysics team deploys a variety of EM instruments from which the best is selected for finding the target objects:

All instruments are fully portable and data collection is rapid (at walking speed) utilising accurate dGPS positioning. At larger sites, increased data-collection rates can be gained using towed systems (at ~6Km/hr) to cover field systems. The user should note the limitations of smaller urbans sites where nearby buildings, power lines and metallic fencing can act to interfere with the EM signal.

Back to EM page

Back to EM Page